The Star Stitch is a beautiful crochet stitch pattern that is sure to add a little elegance to any project. It can be a little tricky to get the hang of, but once you’ve got it down, it’s really fun to work and makes such a pretty fabric.

The Star Stitch is made up of single crochet, the occasional half double crochet, and LOTS of pulling up loops. It is worked in sets of two rows.

If works up fairly quickly once you understand how the stitch is formed. However, this particular stitch only forms a one-sided fabric.

I like this stitch because it’s a fairly easy way to elevate the look of a simple pattern.

Ready to learn it?

What is the Star stitch?

The star stitch is a crochet stitch worked in multiples of two that creates an elegant, feminine texture of fabric. It is made with two rows, and is a little more complicated than some of the other stitches we’ve learned together.

It is formed by pulling up a loop five times across multiple stitches, and then bringing the hook through all of them at once. That, plus a half double crochet finishes off the first row.

Then a second row is added to complete the stars. This second row is made entirely out of single crochets placed into the “eye” of the stars in the previous row.

Is the Star Stitch beginner friendly?

The star stitch is not a complicated stitch. But it is a bit confusing.

At multiple parts in the stitch, loops have to be pulled several times through different places on the same chains and stitches.

I don’t recommend this stitch for complete beginners until they have a decent understanding of pattern reading and stitch anatomy.

(For more beginner stitches, try out the Moss Stitch, the Suzette Stitch, or the Trinity Stitch!)

That being said, if you’re a beginner I don’t want you to be AFRAID of this stitch.

If that’s you, I highly recommend watching this star stitch video before jumping into the crocheting. Since it shows everything in a step by step manner, it will probably be the BEST way to learn this stitch!

Now before we get into this star stitch tutorial, there is something VERY IMPORTANT I must clarify for you!

Did you know there are actually variations of the star stitch?

That’s right. When I started searching up this stitch to learn it, I found that there are different ways to make it.

Overall, I found two main star stitch patterns. Below you can see a picture of two small samples of them.

In this tutorial, are going to start by learning the one on the bottom, mainly because this sample has a better closed surface. This sample uses single crochet on the second row.

However, once we learn that, I will also show you how to change it up to make the sample on the top. This one uses hdc on the second row instead of sc.

They are both beautiful – and once you try them both, you’ll probably get a feel for which one you like better!

Let’s get right into the full tutorial!

I always like to start my work with a foundation single crochet row instead of chains whenever possible.

The greatest benefit of using a foundation row is that the beginning of your work will be just as stretchy as the rest, rather than having a tight chain.

If you do work from a foundation single crochet row (which I highly recommend!), you will make an even number of fsc.

This stitch can be worked in just about any size and type of yarn you’d like, with the size hook recommended on the label.

I absolutely love how this stitch looks with a chunky yarn!

For this tutorial, I used Lion Brand Basic Stitch Anti Pilling yarn in Baby Blue. I crocheted it with a 5.00mm hook.

How to Crochet the Star Stitch – Method 1

Now, let’s go through the star stitch step by step, with photos to help you out.

The first star is made by drawing up two loops from the second chain from your hook, and then one from each of the first three fsc.

Here is where you draw up your first loop. (The front strand of the second chain from hook)

And here is where you draw up the second one. (Back strand of the same chain.)

Step 3: Make stars across the row

Make another chain to start the second star. From now on, the stars will be formed by pulling up loops from 2 different places in the previous star, one from the last stitch used as a base for the previous star, and the next two stitches.

Draw up a loop from the eye of the previous star.

Draw up another loop from the last leg of the previous star.

Draw up a loop from the last base stitch used in the previous star.

Then draw up a loop from the next two stitches (These are the only two that are not connected to the previous star.)

Yarn over and pull through all 6 loops. Ch 1 to form the eye.

Repeat this until there is one stitch left.

Step 4: Eliminating Holes on the Edges

The main “star stitch row” would have a clunky hole on the end. I did not like this way this looked at all, so I set out to find an alternate way to make it work.

Many tutorials tell you to just hdc in the last stitch.

Instead, make a hdc2tog over the stitch from the last leg of the star, plus the last stitch.

Work the hdc2tog as follows:

YO, draw through all 4 loops on hook. Hdc2tog finished!

Now that we’ve covered that, we can get into Row 2!

To start the second row, sc into the hdc2tog. Then make 2 sc in the eye of each star. You may have to flip your work over to figure out where that is the first couple times.

Here is where it is if you flip it over and look from the front.

This is what it looks like in the back (where you are working now).

Continue this until the end of the row, and sc 1 into the final stitch.

Once you have two full rows complete, it should look like this in the front:

In addition, here a picture of the DIFFERENCE between using hdc versus hdc2tog as the last stitch on row 1. Pretty cool, right?!

Continue repeating this pattern until your desired length.

Now that you’ve learned how to crochet the basic star stitch, we can dive into the second method, which just has one small variation (that alters the look of the stitch a lot!)

To make this alternate star stitch, the only difference is on Row 2 and every even row. You’ll make the row exactly the same but using hdc instead of sc.

Let me show you what I mean:

The top row of the stitch below is a regular star stitch row. That row will not change AT ALL when you use this method.

To start the alternate row 2: Ch 1 as usual, but this time, hdc into the first stitch.

Now, simply make 2 hdc into the eye of each star (rather than sc).

Repeat across, and then do one hdc in the very last stitch. As I mentioned, this is the exact same as the sc row except with hdc.

Below is what this star stitch looks like on the right side.

There you go, that is the two methods you can use to crochet the star stitch…and without holes on the ends!

Use the Star Stitch in Your Crochet Projects

This stitch is one sided, meaning the pretty star pattern is only visible on the front. For this reason, I recommend using this stitch for projects where only the front side is visible.

Looking for something similar but not quite sure what? I have lots of other crochet stitch tutorials perfect for making custom scarves and blankets.

I hope you have enjoyed learning how to crochet this fun stitch pattern.

If you have any questions at all, please don’t hesitate to email me: rachel@desertblossomcrafts.com. I would love to help!

If you want to get new stitches and other free patterns straight to your inbox, sign up for my email list!

Frustrated By Crochet Garments? Maybe You're Afraid to even start...

Download my FREE Garment Cheat Sheets that will teach you the 5 essential components you need to understand to make great-fitting sweaters! 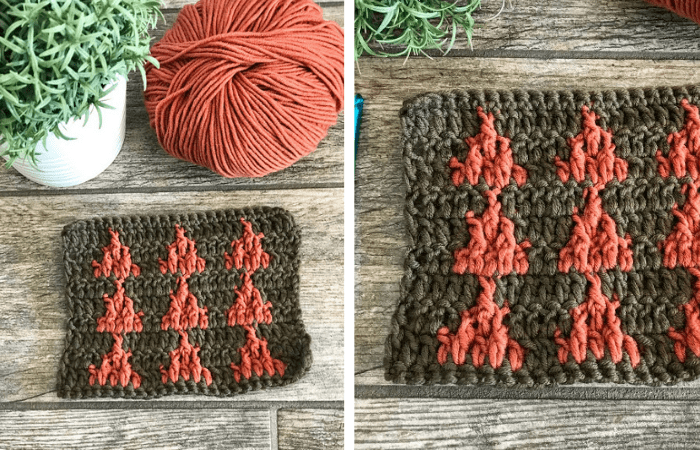 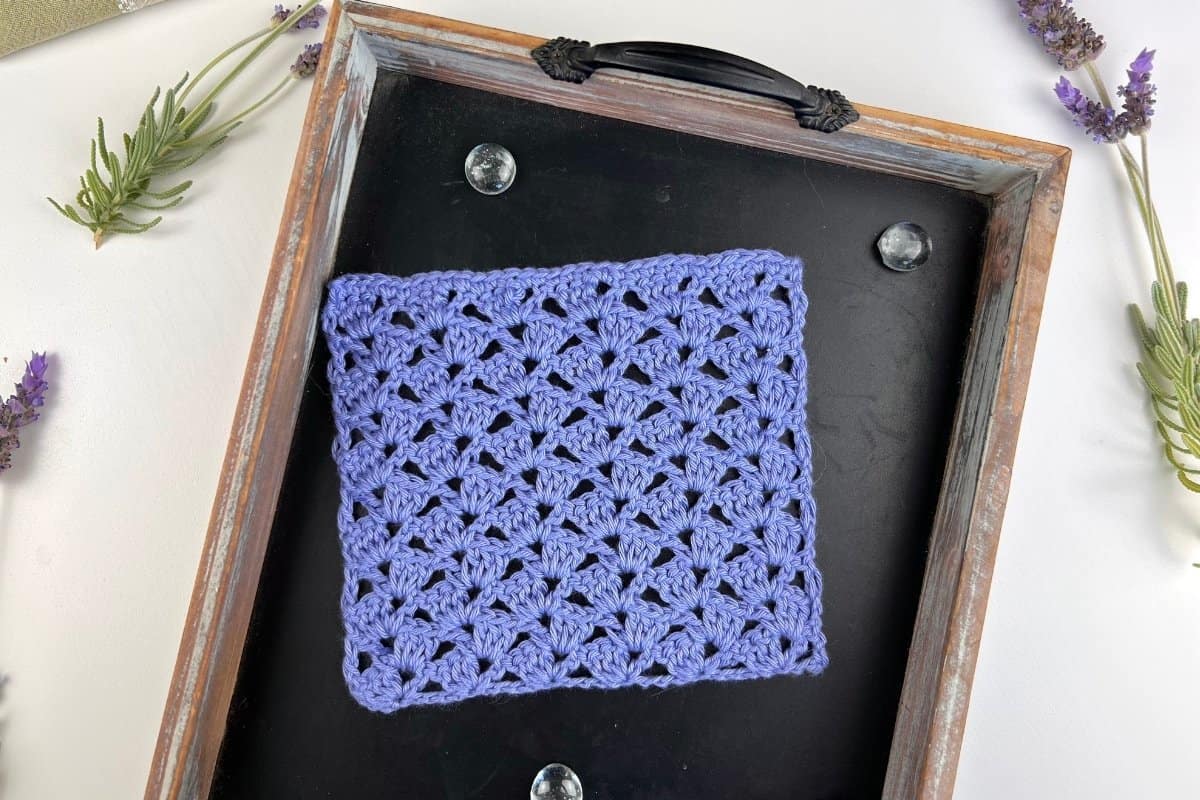 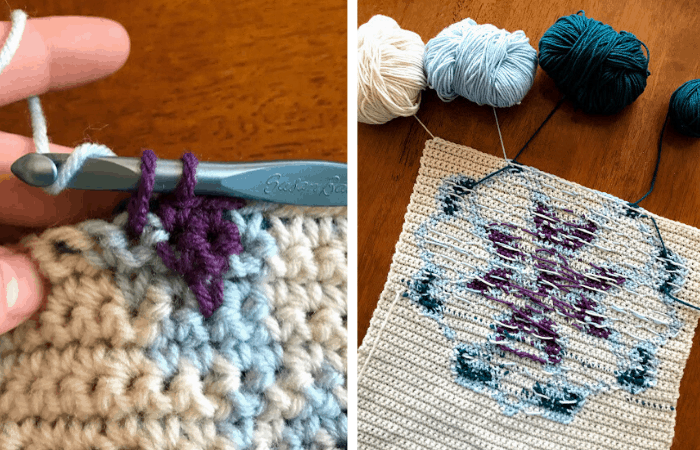 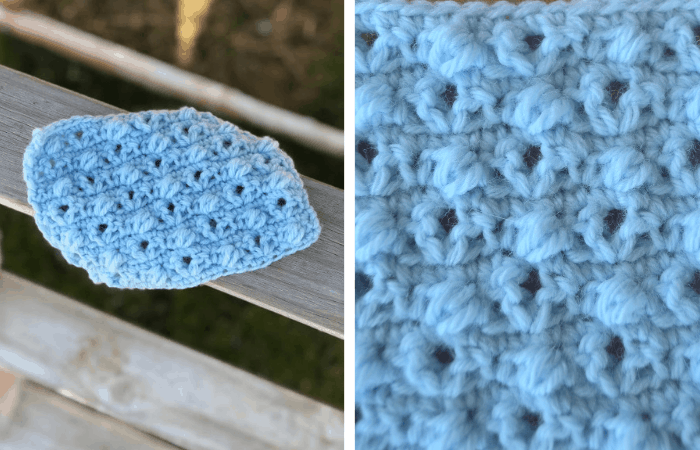 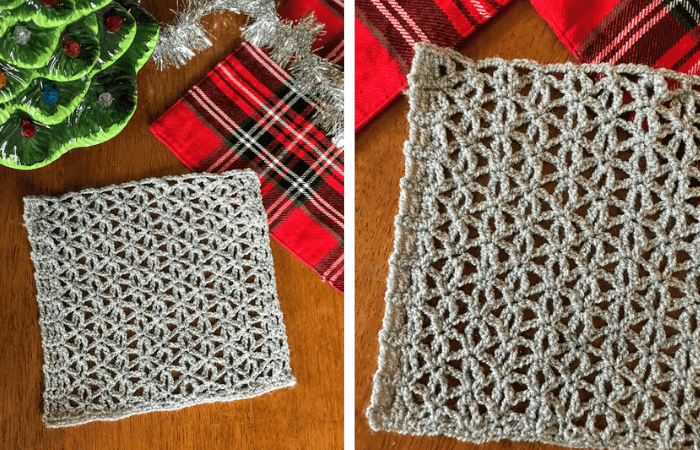